Strengthening relationships with people you know (family, existing friends, coworkers) is an integral part of life. However, one must be aware that personal growth happens outside of our comfort zone. Meeting new people and building the right relationship with the right people is part of exploring out of your comfort zone.

And want to know the secrets of high net worth investors? It’s their network.

Whenever you meet someone in an event (mastermind) or they were introduced to you randomly, remember that you are already planting the seed. That initial hello, short talk, or coffee time can be your ticket to knowing who you can trust in the investing world or knowing the best great real estate deal.

Keep checking on the EVENTS page

Do’s and Don’ts of Networking (Based on Experience)

So you have gone to a few networking events and met some cool people (and found people you would rather not be around).

One of the biggest mistakes I made was going to my local real estate group because they were not focused on passive real estate investing. I started to pay a little bit of money ($10-1500) to attend events and conferences where people had a little more skin in the game and actually had to take time out of their schedule and fly somewhere and get a hotel room. There I found much more serious people. At that point, I tried to find those who were similar to my pedigree (high paid professionals) just a little bit older than me.

A common mistake is to start going for the “goods: who is your CPA, who are you investing with, who is bad, what IRA custodian are you using.” Stop trying to make it transactional because people get an icky feeling from that. Here at SPC our community is looking for long term relationships that extend beyond Financial Independence Friends.

Now, how do you turn that from swapping a few business cards to going “a mile deep, inch wide?”

GOAL: Identify people that you need to add to your network and target those people.

A “target” is someone who has influence, network, net worth, or knowledge you need.

To trim down your target answer the following:
1) What target sub-demographic do they influence?
2) What are the target’s Needs, Wants, Desires, Goals and Objectives (NWDGO)?
3) How can you help the target achieve their NWDGO?
4) What position do you need to be in (from the target’s perspective) to approach them?
5) Consider and think about this: What the heck does someone who is busy and successful want with another pain in the butt person just running the question train on them or just taking their time? Think about the next steps?

Caveat: Do not be a quid pro quo person. Doing things with an expectation for getting something back.

Ex-NBA All-Star gives advice on how to handle the financial and social pressures of celebrity and wealth.

He explains on his voicemail how he wanted people to identify themselves as:  1) Addition 2) Subtractor 3) Divider 4) Multiplier. Some of us are unconsciously subtractors and dividers.

At the very end of the video, Jalen talks about how to not connect good people with bad people in your network in the “Female Assistant” role.

I went to a general meetup of professionals. I don’t really know what I was looking for since I was not really looking to sell anything but I was curious because it seemed like a nice downtown venue and with over 100 participants.

Unfortunately, the crowd was a bit tough to break into (I’m not the natural extrovert) because I was talking about real estate investing. The group median age was in its early 30s with a vast array of professions and industries.

The majority of the people were very career focused (trading time for money) or technical in trade. I also found that the level of participants were mostly entry level in terms of career stage and thus the reason they are hustling for leads, networking, and even jobs.

Needless to say, these people did not have much money to collaborate in a real estate deals and even if they did they were not drinking the Real Estate Kool-Aide and were into their JOBS (just over broke) and “401k 4-Life”.

With this experience, I am going to be more selective in my networking events as I try to find other like-minded investors but here are some fun observations.

I realize that one can call BS and say that I had a negative mindset and that I was not networking for quality or building a long-term relationships. However, I got the feeling that a lot of the people in the room were just interested in passing out cards and with the “what can I get mindset “, which is typical for the scarcity mindset population.

Here are a couple fun examples:

1. One broker for a large bank was hopping around the room (rudely/awkwardly) interrupting conversations, asking to collect cards, saying that they have 1% money market accounts but you have to have over $100,000 in your account. I don’t know what was worse, her tactics or those interest terms.

Just to give her the benefit of the doubt I attempted to find some way she could sell her services to me and since I have gotten portfolio from small banks, I inquired about similar options with Balls Fargo.  Her response was that she “was just collecting cards tonight”… ok I get it… BTW I ran out of cards at that point.

2. I had one Realtor give me a card after we exchanged our backgrounds and he did not even look me in the eye as he checked out the woman’s backside who walked by (wtf). The other funny thing was that I told him I don’t purchase in Washington State (due to cashflow) especially MLS retail, so why would he try to jam a card down my throat. The dude was in his mid-50s which I saw as really sad that this guy still did not get it – the whole holistic networking philosophy. I believe there is always a way two people can help each other to gain synergy – other than one person selling the other person with their product or services.

3. There were a few guys just hitting on women. I felt like I was in a meat market especially in the second half of the evening.

4.  And no night could be without a few bearded 22-year-olds who are referring to the “secret” and sell knives and other yummy supplements (MLM).

The saying “you pay for what you get” applies here. The cost for this event was $15 and it included a free drink… which I needed.

In hindsight, the low price tag barrier to entry was the red flag.

Not saying that the entrance fee is everything but the people who pay 10 dollars to attend a Meetup are a lot different than attendees that attend a free one.

Take that a step forward and think of the abundance of opportunities with these heavy hitters at events that are charging $500-$15,000. 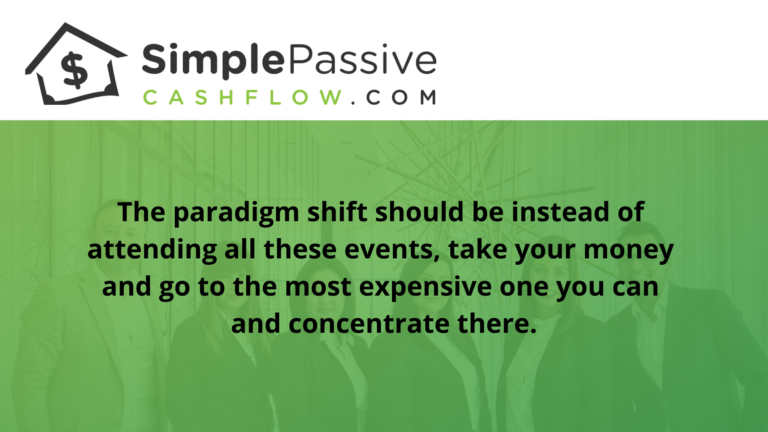 The second red flag was that this was a ‘Networking’ event. Typically, networking events are just plain bad because everyone is out for something.

If someone had truly made it and able to move mountains they ain’t going to no ‘Networking’ event.

Here’s the link to the event (if you’re curious) 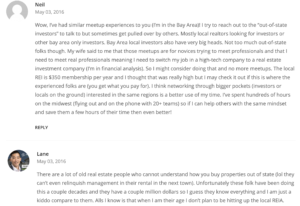 People prefer avoiding losses over acquiring gains.  Most of us have a stronger reaction toward losing something we already own. I see this when people have made bad decisions in buying a non cash flowing piece of land or crappy turnkey rental and they just won’t sell for a loss even though they have no other capital to get themselves moving again.

When I lost $40K in a deal, my first inclination was to just hold on (stick my head in the sand), but realizing that I sold at a lost and moved on and freed up my mental bandwidth to close on over 1,500 units in 2018.

I see this went I go to networking events and run into someone venturing over from the stock trading camp or someone who thinks they are super smart because they are a genius in the computer science universe.

If you are doing well monitoring trends 28 hours a day awesome for you!

Sometimes I have a call with someone and they argue with against starting out with a turnkey rental and cite the reason why MFH (multifamily home) is superior because they have listened to 1,000 hours of podcasts (inception by Guru) but they don’t have any experience even running a SFH (single family home)!

Real estate is very simple and requires soft skills to acquire the network needed to excel. In that respect, it is like playing ultimate frisbee where the playing field is leveled and the physically gifted don’t really stand out like a pick up basketball game would. If you don’t know what I’m talking about you should check out the sport, it could be your calling.

We tend to seek out people who think the same way we do, and we want to do something just because someone else has done it, rather than for its own merit or because we’ve done the research.  This leads to an unhealthy herd mentality.

Example: Investor A tells Investor B that Operator C is a great operator. Investor A does not know anything (how to run the numbers) just investing in a few deals done by Operator Z. Now Investor B invests in Operator C’s deal.

Combine Excessive Self-Regard (rich people with investing track record or not) with Social Proof Tendency you get a recipe for group thinking.

This is something I constantly see in my of the groups that I paid to be in and as I grow my own Mastermind Group.

Just because something has worked in the past does not mean that markets do not change. It is difficult to be objective and move against your past operating system. This is why in the podcast we always ask guests what is something they once thought, put their ego aside, but they realized was wrong.

Its no doubt that its impressive when someone says they own 2,600 units or whatever. Not going to lie, it’s definitely a pissing contest.

You might see a 310-unit deal come by and a 424-unit come by and want to invest just to increase your unit count. Just know to keep to your underwriting standards and not compromise.

Deals are like airplanes. Everyone is waves goodbye in great admiration and fanfare when the airplane takes off but once it disappears into the horizon no one knows if the plane made it to the end goal.

Sometimes it is clear that some planes leave the origin with a quarter tank of gas or a drunk pilot.

It is often the deals that you don’t do (even though it costs you $50,000 of earnest money) are the best deals you make because you prevent the drain of money and more important life energy.

Ego is the thing that gets in the way of greatness.

Here are some things I changed by mind on based on other view points and new data:

2. I thought I would be a cheapo and use a fan but it got too hot at home so I bought an air conditioner. 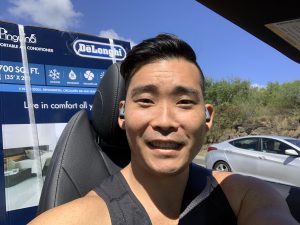 1) Always help people first! There is no social contract for Quid Pro Quo in networking but be sure to be able to define what you are looking for.
2) Be selective and go to events where attendees are curated. I believe that it’s better to go to the higher end networking events because of the caliber of participants are so much higher and these people have the abundance mindset and ability to put make things happen.