Investing in Self Storage

Self-storage provides investor stability during a recession as more people tend to have life events resulting in a physical change such as, foreclosure, change in employment, downsizing and moving home from college, all of which increase the demand for self-storage facilities. The self-storage’s 30 day lease is very flexible and can adjust to the market quickly. Once tenants are acquired, they are extremely sticky as they as lazy to move around for a $20 increase which could be as high as 10-20% of their monthly rent. About 40% of tenants stay over 2 years and that 1 out of 11 Americans pays over $90/month for space to store their belongings.

You can’t travel but a few miles to not pass a self-storage facility. Maybe you have not seen them but start doing so and you will realize they are everywhere.

The self-storage industry has market indicators that suggest that this area of real estate will only get hotter over the next several years. The following is just some of the highlights of my exploration into another uncorrelated or recession-resistant asset class which has good recurring revenue because of the huge numbers of people using it at any given time. The number of tenants leaving does not impact the business overall.

Self-storage vs other real estate classes:

1) Huge amounts of customers using self-storage decrease the risk of your space having no tenants at any given time. It means continuous profit.

2) Very low maintenance as compared to other real estate assets.

4) There are over 53,000 self-storage facilities in the US (about the number of Subways, McDonalds, and Starbucks combined), and about 40,000 are owned by independent operators (mom & pop owners). As as we know Mom & Pops are always behind on the times and team to maximize income and value. So there are a significant number of profitable deals available for the right operator.

5) Rent increases can be done quickly with little pushback compared with MFH apartments. Think of the costs to move a 10×10 with a truck, friends/pizza/beer, and application fees to just save ten bucks a month. Basically, tenants are lazy where they might balk at a 10% increase in rents ($200 increase) they will not realize that their 20% bump in rents ($20) increase goes up on (especially when on auto-debit).

6) During a recession when people are likely to get foreclosed from their homes or downsize, demand for self-storage units will go up (after of course a short downturn like everything else). Although they will be paying monthly, loss aversion will kick in and people will not want to sell their stuff.

8) Large REITs is the exit strategy to sell to.

Forbes (2008) – every other real estate class was in the red except for self-storage, which was up by 5%. This year was considered to be the worst economy for real estate.

For the past several years, there was a big change in the customer demographic of self-storage. Before 2008, their main customers were commercial companies such as construction companies who used the storage to store construction materials. After 2008, the main customers became people coming from the residential sector.

People have too much stuff and the Amazon-effect is not helping.

The residential sector with increasing population continues to be the biggest demographic driver for the self-storage industry.

Another driving factor for self-storage is competition. Because self-storage facilities offer the same kinds of service and value-adds as the top real estate class providers provide, they rank as the best in their class (Class A facility range).

Retirees, especially those who are undergoing downsizing, rely a lot on the self-storage industry. They consider self-storage to be temporary housing for their belongings when they downsize. The same correlation is also present in the U.S. especially in states with huge retirement communities.

In Florida (a big retiree state along with Arizona), the lack of storage rooms in Florida housing has become a very specific driving factor for the self-storage industry. Houses in Florida are built without basements because of the high water table.

Self-storage is amenable to accelerated depreciation. Because of how self-storage facilities are made and the methods of construction that are used, it is considered to be a favorable climate during cost segregation analysis when it comes to taxes.

In an up market, everyone is buying junk and need a place to store it. Good times!

In bad times, people are losing the big house that they could not afford in the first place and have to downsize. HOAs might not allow outside storage – strict limitations on what they can store in their backyard, driveway or other visible areas of their property. They will typically put their prized possessions in storage. Even though its a high cost per square foot its a very small percentage of their budget

Millennials are living in small quarters to store their stuff. They value experiences more than a big home. But they are going to need a place of their skis and snowboards… got storage unit?

Like the gritty Mobile home parks, most self-storage facilities are run by Mom and Pop types. And we love Mom and Pops cause they screw up, don’t know how to evolve, and off become distressed sellers.

The rising cost of homeownership drives many average income earners to apartments, however, apartments are being built all the time where storage space is limited. The trent to rent is creating a strong foundation for future storage needs.

The national average rate fell 160 basis points over the past eight years and has been in the mid-6 percent zone since 2015. Investors interested in higher yields are considering opportunities in secondary and tertiary markets. As a contrarian investor, this is where you want to be. 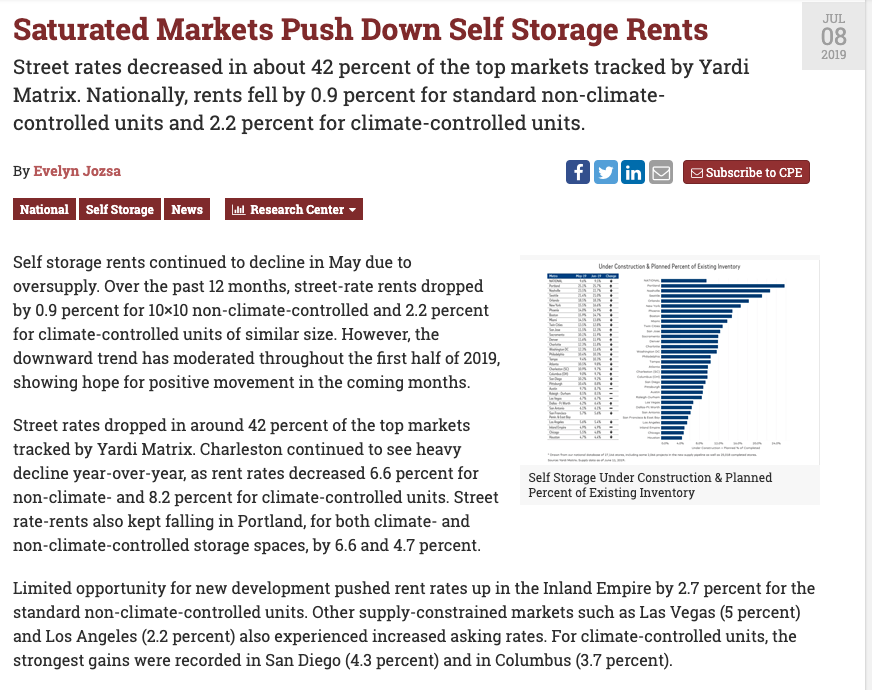 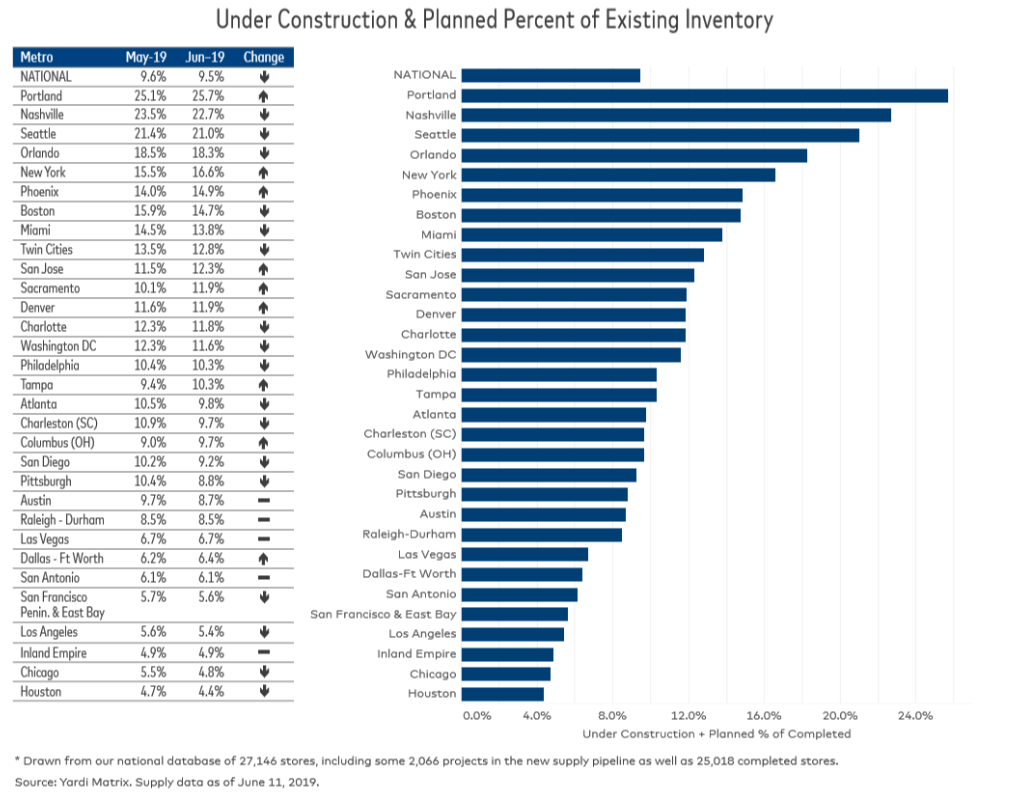 CPE – Saturated Markets Push Down Self Storage Rents – 19.07.8 – [This is why I like MHP much more than Self Storage]

With more telecommuting (people screwing off at home and employers conceding to better work-life balance) businesses will still need to store inventory.

Look for developable land on site to expand the operation. A syndication does this in a two-phase deal where initial investors have ownership in the original deal (Phase I) and sell the land to Phase II investors to complete the development when demand and market conditions are right to support additional capacity.

Some Rules of Thumb

10 SF per person is getting too

1 SF per person is awesome!

Best returns are in secondary/tertiary cities or towns -under 500,000 in city or county because of less competition

300 or more units – big enough to have third-party management

Median income of $45k or more, but even low income earners have a lot of junk if not more. Higher level clientele will want climate-controlled units.

Look for more multi-family in the area than a single family because they lack storage space.

Also, consider if homes have storage space (no basement or too hot attic space) – think Texas/Florida

Like commercial retail, location is more important than anything. Be aware of saturation in the area with the competition. There might be competition, just be best in class and provide the best value – people have the internet and will do research.

Reports for your digest: