Cost Segregation studies are one of the easiest and quickest ways to squeeze a little extra profit out of an investment. If you have ever played racing video games in your youth (or still do) it’s like paying for the inexpensive computer chip upgrade, it’s a no brainer. If you don’t get that reference, it’s “low hanging fruit.”

To understand the benefits of performing a cost segregation, you must first understand depreciation.

Depreciation definition for the academics:

How Does Depreciation Work?

For example, think of a 3 bedroom single family home in Birmingham, Alabama that is worth $100,000. Of that, approximately $65,000 is determined to be the building value and $35,000 is determined to be the land value. Each year you can deduct 1/27.5th of the building value, which is about $2,363 a year that can offset income gains. $2,363 can be taken for the next 27.5 years until all the value on paper is depleted. Unfortunately, you cannot deduct the value of the land.

What is a Cost Segregation Study?

Companies and investors who have constructed, purchased, expanded, or remodeled any kind of commercial real estate (including 1 to 4 unit residential rental properties) since 1987 can use cost segregation studies as a strategic, tax-saving tool.

The study allows the owner to take advantage of accelerated depreciation deductions and defer federal and state income taxes on the reclassified building components mentioned above. Some benefits of a cost segregation study are that a property owner’s tax obligation is reduced and their upfront cash flow is increased.

What Components Can I Reclassify?

Components of a specific property or leasehold improvement are identified and reclassified for depreciation over a shorter time (5, 7, or 15 years). For example, 30% to 90% of the total electrical costs in most buildings can qualify for 5 or 7-year depreciation. 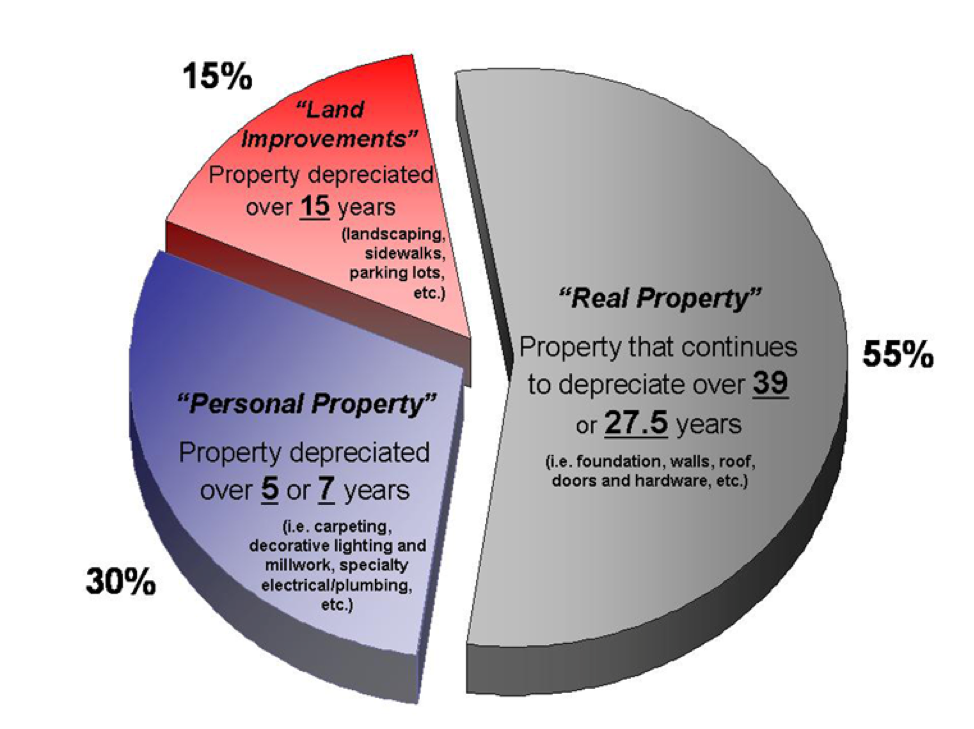 What is required to have a study done?

You need to provide as much of the original documentation pertaining to planning, construction, and current tax depreciation as you can.

This could include a complete set of:

How much does a Cost Segregation Study cost?

On average, the total fee will generally fall between 5% and 20% of the estimated net present value tax saving. You can often get a free preliminary analysis to help determine the. This can be impacted by how large or small the real estate project is. In addition, the location, accessibility, and quality of the records and documents impact the total cost (costs typically range between $4,000-$8,000). Minimum fees can be as low as $2,000 for small projects, and some firms GUARANTEE a minimum of 500% ROI (fee vs. tax recovery) on projects over $500,000.

Cost segregation studies are typically cost-effective for larger syndication buildings purchased or remodeled at a cost greater than $100,000. A cost segregation study is most efficient for new buildings under construction, but it can also uncover retroactive tax deductions for much older buildings.

What are the steps involved in the process?

First off… if you are a Passive Investor (LP) there is nothing to do as long as your sponsors are taking care of the cost segregation.

The Cost Segregation process can be broken down into the following steps from start to finish:

The engineer determines what documents are available (e.g. planning, construction, invoices, appraisal, and current tax depreciation) for reference and referral.

For those documents that are unavailable, time is then scheduled into the Cost Segregation process for document recreation using known industry standard costing data (Marshall & Swift and/or RS Means costing publications). The process takes about 4 to 6 weeks after all necessary documents are acquired. The time that a Cost Segregation Study takes depends on the size of the project and the completeness of the documentation that you can supply.

The site survey is executed and completed. Surveys can be completed within as little as an hour, but it varies between each survey. Measurements are taken and all areas are photographed for IRS verification and substantiation of asset values during the survey.

The engineer returns to the office and crunches the numbers. The number crunching process is when all documents are reviewed in detail, assets are verified, and measured against known costing data, and asset reallocation is applied.

A review committee then examines the results of the analysis completed by the engineer of record to verify its veracity and confirms it meets and exceeds IRS guidelines per the Cost Segregation Audit Techniques Guide.

The final report is issued. The client and CPA of record receives digital copies via email, for application to the client’s tax return.

Depreciation is distributed to investors on the K-1 Form in syndications.

Not making any promises as depreciation amount is primarily based off building specifics and the amount of leverage used in a deal, but here is a real-life example from a $50K Class C apartment investment in the first year K-1 in 2018, utilizing a cost segregation. Extract 10-20x what you normally able to deduct in the first year alone! Take these passive losses and employ the “Simple Passive Cashflow Gravy Train” strategy where you offset your ordinary/W2 income with real estate profession status.

If this is a concept new to you, you may be able to go back to previous years taxes and get back some benefits this year. Often times getting a quote is free and quick.

A recent quote I got back for a few properties:

We purchased a $20M apartment and are about to write off $6M in the first year! The total capital raised from investors was $5.5M, that meant almost a dollar for dollar deduction in year one! 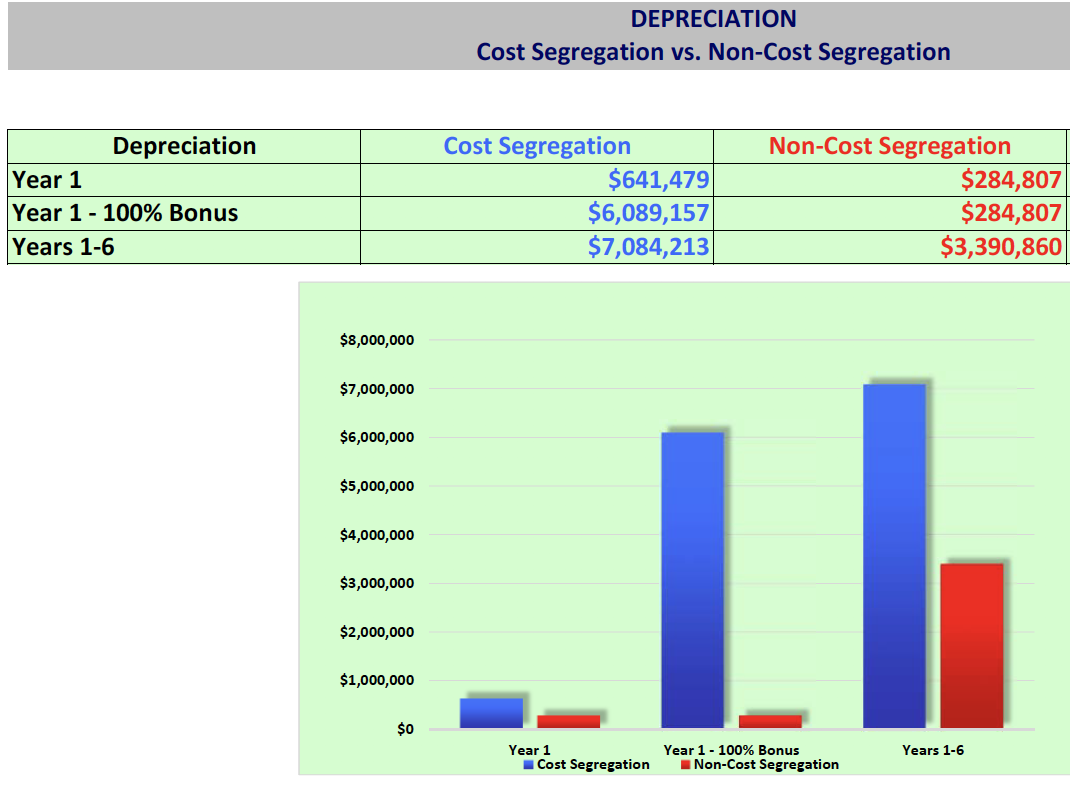 Are cost segregations something new?

Cost segregations are not new. On the contrary, they have been in existence since 1954, when the IRS allowed for certain personal assets to be accelerated into a shorter life class. However, it wasn’t until Hospital Corporation of America sued the IRS in 1997, and won, that the IRS revisited the issue of accelerated depreciation. The IRS ruled that property qualifying as tangible personal property under the former Investment Tax Credit (ITC) rules, would also qualify for purposes of federal income tax depreciation under MACRS (Modified Accelerated Cost Recovery System).

The IRS Chief Attorney wrote a memo saying, “. . . Cost Segregation, for it to be properly applied, had to involve those with competencies in architecture, engineering, or construction and/or construction techniques, in order for personal property assets to be accurately identified and segregated.” As a result of this memo, cost segregation became a viable tax-saving strategy allowed by the IRS.

Can’t my CPA do a study for me?

CPAs are not qualified according to the IRS guidelines. However, most Cost Segregation firms will gladly work with them on a consulting basis to complete the work for you. Remember, the IRS Chief Counsel issued a memo that made it clear what constitutes proper “methodology” in applying Cost Segregation, and it must be done by people who are competent in architecture, engineering or construction and/or construction techniques. See “Is Cost Segregation something new?” above.

Why bother do a cost segregation to accelerate the depreciation? I'll eventually get the deduction.

As investors, we like paper depreciation to occur earlier because that offsets gains earlier and gets more money in our pocket earlier. Just like how you give a mouse a cookie…. Give an investor a dollar early and… they will turn em’ and burn em’.

In other words, you are not creating more depreciation, but you are shifting it earlier to take advantage of the time value of money concept.

A cost segregation study in effect gives you an interest-free loan from the government for the first 15 years, which you will then repay interest-free over the remaining 25 years. Wouldn’t you rather have your money now? There are also advantages to doing a study if the building is going to be sold (via 1031 exchange) or if the owner of the building dies.

Does the cost segregation study need to be completed this year (for example, Dec 2020) or do we just need to acquire the property this year (2020)?

For bonus depreciation, we just need to acquire. The cost segregation study can be completed in the next year (in this example, 2021).

How much will I save on taxes?

Most cost segregation firms will perform a free analysis if you provide your basic property information and tax rate. From the information you provide, they can calculate a conservative estimate of the accelerated benefits you can expect, as well as their fixed fee proposed for the final study.

Typically, tax savings from 5% to 10% of the building’s original tax-basis are generated, but there are instances where it can be substantially more. Each property and circumstance is unique, so it requires a case-by-case approach to give you a definitive answer.

How much accelerated depreciation can I get for different commercial properties?

Certain types of commercial property can be grouped together to give us an idea of the percentage of those types of buildings eligible for accelerated depreciation. Your results may be greater, or less than those quoted here, but in general, property that falls into one of the following categories is most likely to result in accelerated depreciation within the specified ranges.

Will a study increase the chance of an audit?

A study conducted by a reputable Cost Segregation firm should strictly adhere to the IRS Cost Segregation Audit Techniques Guide. The type of study most firms perform places you in Internal Revenue Code Tax Compliance, which actually decrease your chances of an audit. However, you should be aware there are six different Cost Segregation methods allowed by the IRS, and not all are of equal merit. There is currently no standard method, and there is still some ambiguity about which method is best. If you have heard conflicting information about what is, and is not possible regarding Cost Segregation, it really depends on which method is being used.

Will I be assisted in the event of an audit?

A reputable Cost Segregation firm can assist you in the event of an audit. They will focus on doing the Cost Segregation Study to create documentation and support for conclusions so that these are easily communicated and resolved with the IRS. In fact, you should expect a final report that is “all inclusive”. The report should quote specific Internal Revenue Codes related to the reallocated assets. Additionally, it should provide photographic evidence of these same assets for complete substantiation of the assessment. A properly documented Cost Segregation Study helps resolve IRS inquiries at the earliest stages.

What if I lack some of the needed documents?

A cost segregation study can still be performed even if you lack some of the necessary documentation. Construction, engineering, and other specialists will do an extensive site visit. They will measure and estimate using currently accepted costing techniques and pricing guides (such as the IRS-recommended costing publications Marshall & Swift and RS Means) to determine the costs that qualify for shorter recovery life periods.

For more information on Cost Segregation or a free analysis, contact me for a referral Lane@simplepassivecashflow.com 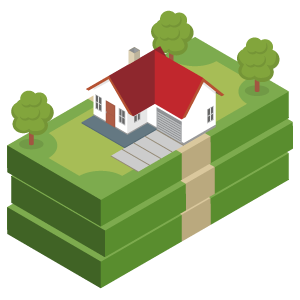 I paid 4% in taxes in 2018 because of the passive losses that real estate gave me.

Bonus depreciation has made 1031 Exchanges obsolete, group your passive losses on non-participatory deals as a real estate professional – more info.

(Here is a cheaper service for cost segregations for single family homes or under $2M assets, but I am personally a little skeptical).

The video below shares some of my thoughts against a 1031 exchange because you are a distressed buyer.

What’s next? Join the Club!